The Airline Industry and COVID-19: Saving for a Rainy Day 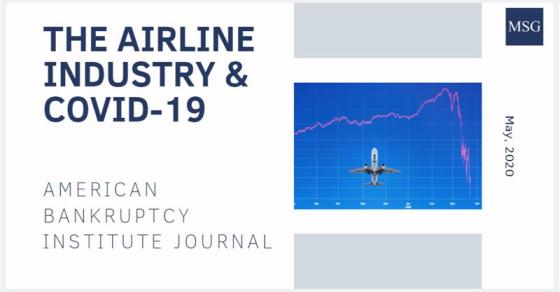 The Airline Industry and COVID-19: Saving for a Rainy Day

The Michel-Shaked Group’s Israel Shaked (Managing Director) and Brad Orelowitz (Senior Vice President) published an article in the May 2020 issue of the American Bankruptcy Institute Journal discussing how the airline industry distributed tens of billions of dollars to shareholders and did not save sufficiently for a rainy day.

When considering whether to lend money to a company, lenders consider a company’s historical performance and its projections for several years in the future. In addition, lenders conduct various ratio and sensitivity analyses. Sensitivity analyses study how various sources of uncertainty contribute to the model’s overall risk profile. They are typically performed by changing one or more variables in the company’s financial projections and measuring the outcome. The extent by which these variables are changed is typically based on historical company-specific information, industry information and macro-economic factors. However, none of these sensitivity analyses are based on extreme cases like COVID-19.

Since the airline industry’s deregulation in 1978, market factors have resulted in dozens of bankruptcies, restructurings and consolidations within the industry. Many of these airlines were put out of business by losing flight slots due to price competition. Other airlines were gobbled up by their stronger competitors. Recently, the airline industry has experienced an extended boom period. Through the end of fiscal year 2019, the industry experienced historic levels of profitability. In 2019, the six largest U.S.-based airlines (Delta, American, United, Southwest, Alaskan and JetBlue) had combined revenues of more than $175 billion, with a combined operating income of almost $19 billion.

In addition to the increased profitability, the balance sheets of these airline companies have also improved substantially over the past decade. It was assumed that these airlines had strengthened their financial positions to levels that will enable them to withstand a downturn in the economy.  However, despite the stronger balance sheets and improved profitability, the combined cash-on-hand and cash equivalents for the six-largest U.S.-based airlines actually decreased over the decade.

Due to the suddenness and severity of COVID-19, there was no way to predict the fallout to the airline industry. Similarly, when budgeting, one typically does not plan for a once-in-a-lifetime event. The authors do not believe that lenders and credit-rating agencies would — or should — change the way they perform their sensitivity analyses, as there is no way to reliably predict an event that lies so many standard deviations away from the expected mean. If lenders would consider these events in their assessments, they would never lend money. However, in a cyclical industry, it is essential to retain some liquidity for a rainy day.